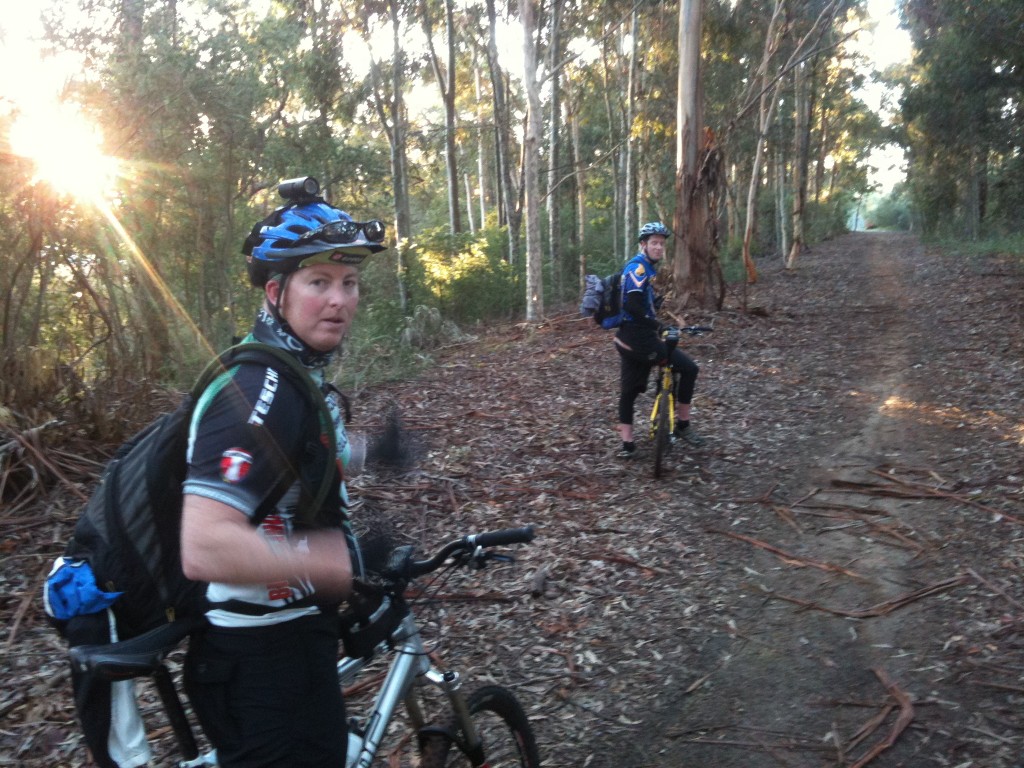 With the Dwellingup 100km off-road enduro coming up in September I found myself presented with a problem.  I’d ridden my mountain bike exactly once (a 4hr enduro) since the last 100km effort (2010 Karri Cup[1]).  I remember telling myself after the Karri Cup that I’d need to put in some more saddle time on the (near ten year old!) Giant dually before doing something like that again.  The time for action was nigh.

I’d wanted to tick the Kep Track off my list of ‘Rides To Do’ for some time now.  I’d read about Andrew’s expedition and thought I’d like to give it a go.  It’s basically a dirt track that follows the Golden Pipeline from Mundaring Weir to Northam, 75km away.  It’s not technical at all but does provide ample riding distance on dirt which would suit our purpose nicely.  I’m not really into touring and staying in Northam didn’t turn me on so it was put forward that we ride it out and back.  It’s not even hilly but my thinking was that what it lacked in elevation would be made up for in distance.  The Dwellingup100 involves quite a lot of up and down but is only a mere 100km – so surely this would be a good training ride!  A few emails to some interested parties, a short debate on a free weekend and a date settled on.  It’d be good to knock this one over in a day.

By the time Sunday morning rolled around our band of riders had been whittled down to four.   Scott, Lee, Craig and myself rocked up to Mundaring Weir Hotel carpark at 0600 [2] where it was deserted and dark.  Scott and me on dually’s, Lee on his cool Focus hardtail and Craig on his Surly Long Haul Trucker.  After some Mindless Banter™ [3]– mostly about how chilly it was, and jibes about me and Scott not having lights we set off shortly before 0630.

Three of us heading up the road and then we wondered where Scott got to.  He had done this ride before and knew the way.  He did the first half klick on the track whilst we plodded up the road and then joined the track.  Jumpers and jackets were discarded shortly afterwards.  The 7km or so to Mundaring township is mostly wide-ish sniggletrack [4], crosses the road a couple of times and very pleasant to ride, even uphill.  It was dark, with just enough moonlight, and a bit of mist.  A favourite part of any ride, I was just waiting for the Tauntauns to appear out of the white haze…

Negotiated the unsigned dogs-leg at Mt Helena with no hassles thanks to Scott’s prior knowledge.  Most of the track is easy to follow but this intersection could be a trap for first timers.

Past the BMX jump track at  Chidlow The rest of us resisted Craig’s call to ride the jumps.  I’m useless in the air.  Once my bike wheels leave the ground I may as well be a triathlete [5] for all the skill I have.

Section of flat path that was dry but quite bumpy.  In the not too distant past it seems a horse or two had been through here when it was wet and left many hoof marks which had now dried hard.  Kind of like corrugations but different. Certainly not the most pleasant surface to ride on.

Went past Baker’s Hill and it’s over-rated pie shop (IMNSHO) It was somewhere about here that I first started to feel it.  Yes it wasn’t that far into the ride but lack of mtb saddle time and yesterday afternoons racing was reminding me that the effects were still present.

Nearing Clackline there was a fun downhill run ending in a gully across a stream. Video

Six or seven kilometres of deserted road provided Craig with a chance to stretch his Surly’s legs necessitating him to wait for the rest of us at a lovely paddock edge.  Reminded our two ex-pats of Wales apparently.  It is quite scenic in parts and all the sheep were out with their lambs following them about. We continued past the West Northam water tanks followed by a nice run of sniggletrack just before Northam.  A cool, rough downhill, complete with dodgy pipe crossover before a short pathway blat into Northam town centre where the Garmin told me we had done 75km on the dot.

Not much doing in Northam on this lovely sunny Sunday.  I was looking forward to the mountain bikers lunch of choice [6] but was sadly disappointed with what was on offer.  A bakery, a cafe or Chicken Treat.  We settled on the bakery which was empty when we arrived but within a minute of entering it was filled with more than a dozen locals.  Purchases were made and we adjourned to the local park by the river to scoff down our sausage rolls, pies, buns, pastries, milk & Cokes.

After refilling CamelBaks and bottles we headed back out of town and climbed the steepest part of the ride.  The rough track next to the pipeline wasn’t as hard going up as I thought it might be when I was barrelling down it earlier on.

A regroup at the Wales-esque paddock took place before the short roll down the road to Clackline.  We waited there too as it seems Lee had a puncture.  Craig went back to help him out with me and Scott heading off up the track.  It wasn’t too long before Craig and Lee caught, then passed us and we were off the back again.  This might have been the last time I saw Craig until I finished the ride!  Lee I could see in the distance for some time and almost caught him at a road crossing but then he disappeared into the yonder again.  I was really hitting the wall at this point and it was somewhere around the 135km mark that I stopped and waited for Scott.  I was knackered and inhaled my emergency gel.  Scott turned up after a few minutes and we had some more lollies.  A lady rider heading the other way said she hadn’t seen anyone else on the track.  I figured Lee and Craig must’ve finished.  We re-mounted , determined to finish off the day.  I spent most of the remaining kilometres back to Mundaring township yo-yoing off the back of Scott’s wheel.  I perked up once we reached the downhill sniggletrack back to the Hotel and we bombed down it, legs forgetting that we’d already asked 144km of them.  I finished the last of my water somewhere around here.  Rolled into the carpark, band was playing in the pub across the road, with 150km on Mr Garmin.

Craig was waiting for us – and had been for 25 minutes!  Strangely, Lee turned up a few minutes later than us.  Turns out he stopped to fix another flat and then got lost, probably missed the dogs leg mentioned previously at Mt Helena on the way back.

I was completely spent.  I’d drunk 1.5 litres of water on the way out,  3 litres on the way back, a small Coke, sausage roll, small mocha milk, two bananas, two fruit & muesli bars, two Coconut Rough’s and my emergency gel.  It was a bit before 1645, slightly closer to my self-imposed limit of 1700 than I’d planned.

The ride was certainly harder, or perhaps it’d just taken more out of me, than I’d anticipated.  The mission was accomplished (which was to get some time on the dually) but if I was doing this ride again I’d definitely take my commuter (the Salsa ‘crosser of Orangeness).  It’s much better suited for this ride.  Hopefully I’ll get in a couple more sensible rides on the Giant before Dwellingup.

[6] burger with the workx & caramel milkshake