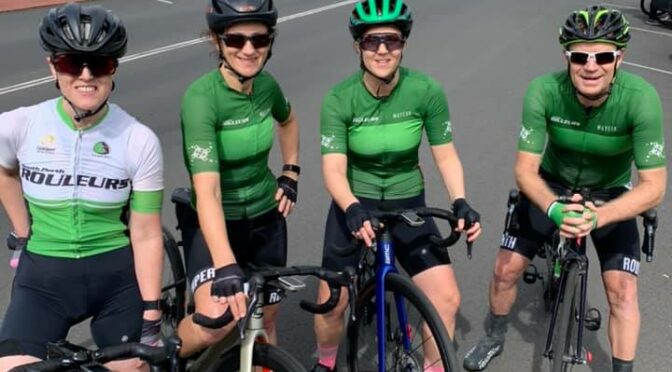 We see today a return of the classic Mr Greg “Mo” Murray race report. With a huge turnout by SPR it was a huge weekend just gone of racing for the club, from first time racers through to our most experienced. Handing over to the Mo…

It’s time to properly celebrate the SPR Womens’ achievements in one of the oldest and most prestigious races in the country, this being the 96th running of the event. Booyah.

So, in case you missed it, SPR Chicks took first and second place in the Collie-Donnybrook on Saturday! SPOILERS..

Well, hello Old Friend. Opening scene: At 70km in, dropped from the group but pulling a bunch of others for no particular reason, I wondered to myself – why? Never gave myself a good answer. But how did we get here……. as with any of Tarantino’s decent pics (Pulp Fiction, Reservoir Dogs) let’s take some license with timelines

It’s a curious thing – the handicapping for a Handicap event. Some are done well (like PDCC races, anyone?). SPR did the Beverley, it wasn’t too hard. Saturday left a lot of unanswered questions. Like why was an SPR D grade bloke was given a start in the 10-minute group? Indeed a fair question.

Questionable handicapping aside, there was a big list of proper hitters out this year. With a veritable army of SPR Chicks off from the Limit starters, this year’s ToMR Squad members were well represented setting off early – The Treas., Liz, Jane, Nicki.

The Silver Fox was starting off 27 minutes (aka the Silver Sandbagger), followed by Hanno at 22 min, Bex at 20, The Librarian, Paperback Writer, Ex-Prez and the Sooth-Efrican Connection at 18, Mo off a ridiculous 14 minutes. Further up the speeds, Bonner V2.0 and the Italian Stallion were set off with more Sandbagging A graders (favours for mates). Waaay up the list were JP, Richard Kimble, LagerBoy Braybrook, and Patrick Tractor-Williams. Hilariously Crofty was given a 10 min handicap, up amongst the A graders. Did we mention the handicapping? It was also great to see to the Original 2016 Beverley Handicap’s Golden Boy, Col Tierney!

Off we went, out towards the Ferguson Valley. Hanno made a much more positive start this year, managing to make the first sign posted, traffic managed, fully visible first right-hand corner 250m from the start and go the correct direction. It’s a big improvement on previous years. The Limit and early groups splintered and small bunches were across the course. Bec’s group, like a washing machine full of stinky kit and disorganisation (too many dudes searching for clues?) converged with Paperback’s group on Mumby Rd.

Meanwhile, the 14-ers suffered a virulent strain of won’t-work-itis and fell apart before the first hill, picked up by the pursuing group of V2.0 in no time and dispatching a Mo like the 1st December. 35km of solo headwind ensued. Character building, apparently. Mo met up with Crofty for a stint, before a rampaging 10 min group ate us up, like Kimberley reef sharks in a feeding frenzy. Which was then followed by Scratch – at the 38km mark. Handicapping, anyone? Scratch ripped the bunch apart like a space/time continuum rift in Dr Who, space shrapnel strewn everywhere. From there, it was every wheel for themselves. The sky wept with drizzling rain at the state of affairs. Why, oh why.

Meanwhile, up the road, Hanno, Ex-Prez, Paperback, The Librarian and Bec were still ahead of Cyclone Scratch, but not for long. By the turnaround, all was done – Scratch had the race lead.

Mo held place in a comet dust group blown off by Scratch, knowing SPR Chicks were still at the head of The Women’s race, however….. And. It. Was. On.

V2.0 was hanging with the fast boiz (hanging, dying – sometimes it’s hard to see the line between) and well and truly leading. Behind though, Paperback, The Librarian and Bec for SPR were in there with a Loner Dome-r, Chaotic blues and possibly some dark horses – who knew.

The Ex-Prez (Obama?) had been working with Bec and Paperback, using the tailwind that was so hard fought oppositely and was charging. Mo saw Obama, Paperback and Bec ahead. With one last, desperate, Beverley Heroic breath he screamed “BEEEEEEEEEEEEEEEEEEEEEEEEECCCC!!!! GET OOOOOOOOOOOOOON!!!” (picture this in dramatic slow motion for full effect….). Bec jumped from 30-odd to 50-odd km/hr, caught the wheel and was on board with Mr. Briefly.

Like Rose and Jack after the sinking of Titanic, there was only room for one on board. And so, Mo was cut adrift, left to gently fade off the back into the distance. And the heavens opened again. The gentle creep of wet made its way from the top of the sock, to the ankle, and slowly into the shoe as a final, damp cold insult to my feet. But Bec wasn’t perturbed by any sentiments. Mo time was followed by Go time.

Bec held the bunch for a solid 15km at bum-clenching speeds, along the way picking up The Sooth-Efrican Connection. But the rubber band was strained, and just like the elastic in Dad’s old faded Y-fronts, it let go (reminder: Fathers Day around the corner too. New jocks for the Old Boy please). Ploughing on, The Sooth-Efrican Connection morphed to the Hermann-ator and picked up Superhero duties, winding up the pace and coordinating the remainders into a working unit.

Mo had been collected and dispatched by several smaller groups, all in the box, all questioning life choices as the drizzle came and went. It may have been the changing of days, months, seasons for the way it felt. Wahoo says it was 20 minutes. Despite being abandoned (…Near, far, wherever you are, I believe that the heart does go on…..), it was hoped (thoughts and prays, Y’all) that Bec would stay away. But the Chaotic blues were chasing, and caught Mo on the Mumby rolls.

With the Mumby pub looming (hand ups, anyone? Anyone? Purleeese!) the group was organised and travelling at a good pace. Would they make the catch……

The ramps that make up Heartbreak Hill on the return, true to the moniker, made hard work of a arvo ride in the country. As far as one could see a head and behind was nothing but solo riders. And more drizzle. Bec had managed to get another smaller group working together for the homebound rollers. Some big units, all wanting to get home ASAP. And so they worked, and worked, and worked……

The win on the day went to Former National Road Race Champion Michael Freiberg taking the fastest time record. At 2:16:45. A little faster than us… just a smidge.

V2.0 took an absolute barnstorming win in the Women’s, having started with a crazy fast bunch. Bias aside, Bec rode a cracking race. Forced to perform solidly and “work” in the teamwork with familiar and very unfamiliar bunches, SPR dug deep once the early madness settled to make a difference on the day. V2.0 was last seen inhaling Macca’s in the car park. Bec – well she blew the prize cash with Red 36 on the Roulette table. Vices, eh? Oh, and Patrick Tractor-Williams grabbed 15th overall.

With an odd split across start groups, the SPR A and B grade Chicks absolutely excelled. The less regular racer SPR Chicks turned up to what has been roundly talked up by the regulars as one of the hardest of Collie-Donnybrooks in memory. We came, we saw, we raced the Collie-Donnybrook.

See the SPR shop for the menu and all the details.

Tickets available now in the SPR Shop here. Numbers are limited, so if you are keen don’t delay.

Don’t forget the club’s monthly chicks coffee ride tomorrow. It departs from the Narrows North Side for 6.00am & finishes at Botanicals Cafe in Kings for 7.00am.

Come join us for a cruise or later for a cuppa if you’re free.

From the Ride Coordinator – Thought to take the time this week to reflect on just how lucky we are to be riding restriction free and sharing the experiences with our fellow riders at the coffee shop afterwards. Thoughts go out to friends and family interstate who are doing it a lot tougher than we are.

In the midst of it all, SPR is working really hard to introduce new initiatives for our members to cover the “broad church” we have in our membership base and beyond.  Thanks to a recommendation from our motivated SPR Chicks crew, we are about to launch a new mid week, mid morning intro ride that will be lead by a ride leader once a month. Also this weekend we have our second instalment (first for many due to weather last time) of our monthly Sunday Gravel ride along the Heritage Trail with the optional extension out to Chidlow. On our short hills ride, we also have a regular ride group who call themselves “the happy hills riders” who ride the short hills route but at a slower pace than the group. Off the bike, we’ve introduced a Vuelta dinner/tapas which is in next week. We now have all the grand tours of Europe covered at the dinner table.

Which takes me back to the first point made. How lucky are we to be riding in groups and being able to mingle with fellow riders and friends. Let’s make the most of it whilst we can in these extraordinary times.