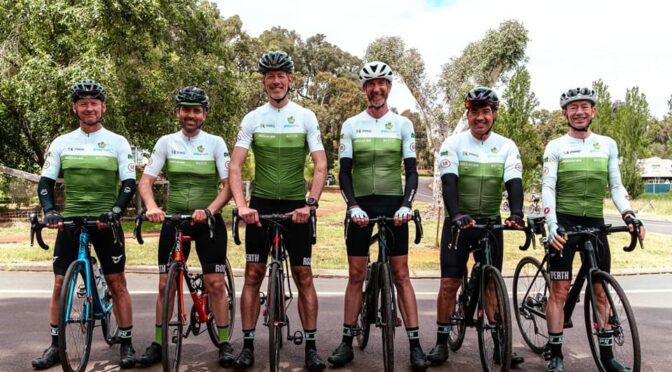 Welcome to the first of our Tour of Margaret River 2021 team write-ups. First up is Mens 5, brought to us by David Mennary. SPR Mens 5 is David Menarry, Jesper Marstrand, Maurice Hermann, Adrian Emilsen, Nigel Coles, and Adam Ralph (left-to-right in the photo below). If you haven’t already, check out our overall event write-up.

First and foremost, the Tour of Margaret River (which is actually based around Nannup, not Margaret River) is a social event.  Yes, everyone trains for it, because it’s a personal challenge and a team event, and you want to do the best you can for your team.  But it’s the social side that makes it so special: living with your team for several days, as part of an amazing club, and just being part of the WA cycling community.

Having raced the Tour five times before, it didn’t matter that I had never won anything individually or as part of a team.  This year was no different: no expectations, no plans, except to have a great time and just do our best.

The lead up to our Tour was bumpy to say the least.  For various good reasons, not once had the six of us ridden together as a team prior to the Stage 1 team time trial.  Adam Ralph was recovering from a broken wrist (still not healed), Jesper Marstrand was so sick the week of the Tour that he stayed in Perth an extra night, travelling down on the Friday morning before the first stage, and Maurice Hermann was recovering from a blood infection the week before.  Herman du Plessis was a late call up and hadn’t been training and Adrian Emilsen was so busy with work and family that he could only make it there late on the Thursday evening.

The signs were not promising, so we were reasonably satisfied that we were graded in Division K after the Stage 1 team time trial (this year went all the way down to a Division O).  We were ninth out of the ten teams in the Division, albeit with less than a minute between 1st and 10th.  We had planned to finish the stage with all six together, even though the time was taken from the 5th rider and we could have dropped one of us.  More importantly, the heavy rain showers stopped just before the start of the stage, so we also had a dry ride: bonus!

Stage 2 saw us once again at the Nannup Rec Centre.  While there was no sign of rain, it was an early start and a cold, overcast morning.  The warm up beforehand was more to stop us getting colder … but at least we could expect to warm up as the day progressed (little did we realise!)  With a long, challenging hill only a kilometre after the neutralised start, it was important that we were well placed in the bunch of 60 riders.

The plan was for Adam and Adrian to try and make the break and the rest of us to look after our fourth placed rider, because the team times were to be taken on the sum of the first and fourth placed riders in each team.  They managed that perfectly and I ignored the team plans to find myself in the first bunch behind the break of six, with Jesper and Herman in the second bunch and Maurice in the third.  And then it started raining … fortunately only for about five minutes, but definitely not forecast and absolutely not welcome.

As the race went on, the first two bunches merged but there was no sign of the break. I was delighted to see Herman and Jesper join me and we rode the middle of the race together.  I was still cold, so I spent my fair share on the front, hopefully pushing the pace but at least warming up a little.  The merged bunch stayed together until the Kandalee climb and then promptly exploded.  I was fortunate to be near the front and stay there.  I was also delighted not to see Crikey Cadel the crocodile on the way up (a long story).

With riders in ones and twos at the top a few smaller groups began to form on the way to Greenbushes as riders found comfort or motivation in numbers. And so it stayed for most of the remainder, until the final climb past the Talisman Lithium mine into Greenbushes.  I hadn’t realised that Jesper and Herman had re-joined after Kandalee, and the three of us finished the stage within a minute of each other.  While Adam was desperately disappointed to be pipped on the line into second, his result and Adrian’s fourth place were outstanding and laid the foundations for a great team result.  Maurice followed the team plan and saved his energy for Sunday’s stages, but was still not that far off the pace.

And so it was that on Saturday evening we found ourselves in the unfamiliar position of top team in the Division, a minute and a half above the second placed team, and a decision loomed: go for the win on Sunday or just enjoy ourselves.  To be truthful, it wasn’t a hard decision to go for it, knowing that if we didn’t win it didn’t really matter (who were we kidding?)

While Saturday’s stage was the longest and hardest, Sunday had two stages, a road race from Nannup to Balingup and a team time trial on the reverse route.  From prior experience we knew that most people keep some energy in reserve for the time trial, so it was no surprise that the bunch stuck together for most of Stage 3, with the short sharp climb at 2km to go being the only danger.

We knew we just had to keep our time gap to be in with a chance of keeping our lead until the end, so Adrian and Adam were once again on marking duties at the front.  I had just clawed my way back onto the front part of the bunch at the top when the call came through that our race was being red flagged – neutralised – for the finish into Balingup.  This was because of an accident earlier and the race director trying to avoid further problems, a very sensible decision, but once again Adam was unable to claim his deserved first place.

The good news though, was we still had our full 90 second gap.  Definitely not enough to be sure of the overall result, but enough to give us some confidence it was possible.  The game plan was to go off steadily and try to keep the team together as long as possible, knowing that we could afford to drop two if necessary (the team’s time going off the fourth rider).  Which is exactly what we did.

Having had such great races until now, it was perhaps no surprise that Jesper’s cold caught up with him and he dropped off after about a quarter of the way into the Stage 4 team time trial.  Down to five, Herman, Adam and Adrian continued to ride very strongly while Maurice and I were hanging on, knowing we need at least four together at the finish.  Three quarters in the elastic broke for Maurice and we were four.  Herman’s strong first half was starting to bite a little and so we were both reliant on Adrian and Adam putting enough pressure on to keep us in contention but not too much that we blew up.

The last 10km was extremely tough and both Adrian and Adam were doing longer turns on the front.  We had overtaken two teams who had started before us, so we knew we were doing OK, but our main competition, Denmark Mitre 10, had started several minutes before us and we had no idea how they had been going.  Eventually we hit the 2,000m to go sign and reaching the downhill into Nannup with four of us together was a huge relief.

We were expecting the tight corners through Nannup so we avoided going full gas through them.  And then there was the kilometre – which seemed like five – along Brockman Highway as Adam gradually ramped up the power before turning into the finish straight back at the Rec Centre.  Avoiding a single rider from another group, we went a little slower than we would have liked around that last corner, but we avoided any last minute catastrophes and finished together, exhausted.  Well at least for me and Herman.

It took a couple of minutes before we heard our result, by which time the final team from our Division had also finished, around a minute or so after us, so we knew they didn’t provide any threat. In fact other teams came to congratulate us before we had the times confirmed: we had managed to win not only our Division, but also the stage, by three minutes and two seconds respectively.

Lessons learnt: a) have a plan and stick to it (but adapt if needed); b) play to your strengths; and c) most importantly, have fun.  As a primarily social event, I’d like to say it wasn’t important to win, but being able to deliver for the team and the club made it all the more enjoyable and a Tour to remember. I’m not ashamed to say that I may have had a few emotional moments once the result sunk in.

And finally, the thank you’s.  Of course, to the rest of the team (in first name alphabetical order), Adam Ralph, Adrian Emilsen, Herman du Plessis, Jesper Merstrand and Maurice Hermann (our team captain).  But it’s not just about the racers: there is a huge team behind the scenes who also share the success, our wonderful volunteers, the South Perth Rouleurs director sportif and race organiser, Steve Burns, and not forgetting the sponsors who made the ToMR kit and apparel possible: Pilbara Resource Group, Drillman, Total Marine Technology and Cathay Mortgages.