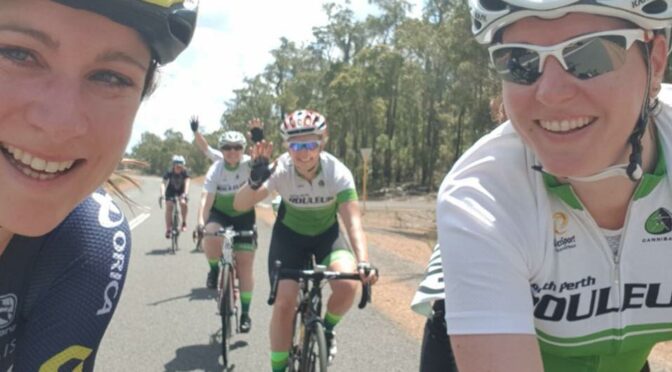 Cycling is a huge part of Sam Walkers’s life, and she’s giving back to the club by being on the committee.

Here, we find out a bit more about Sam.

2. What brought you to cycling and to SPR?

Liam and I had just returned from living in Kalgoorlie after 2.5 years, so we were looking to do something together and get some fitness back. A Google search of cycle clubs in our area led me to SPR in Nov 2012 and the rest is history.

3. How long have you been with the club?

4. What is your most memorable experience on the bike?

Oh wow… far too many, but stepping on to the podium in third place for the TT at the 2018 Masters Champs was pretty special.

5. Why did you choose to be on the SPR committee and what do you hope to achieve as part of your role?

Previously I was working FIFO so I wasn’t able to commit time to the club, but I’m currently studying full time and based in Perth so it was a good opportunity to join the committee this year. I’ve been a member for a number of years and think the club does a lot for its members and knowing how much work others have done in the past to ensure the club continues to run and provide for its members, it seemed only fair to jump in and help out and not leave it to the same people year after year.

6. Can you tell me a bit about your life off the bike?

I’m studying my MBA full time and previous to that, worked FIFO as a commercial manager for a gold mining company. I’d been doing that for the last 6ish years.

I live with my husband Liam, who also rides. I also enjoy hanging with friends, eating good food and wine and travelling overseas when we’re not locked down.

From the Ride Coordinator – Well we were hoping for the best last weekend but actually got a pretty raw deal from the girls and boys at the BOM. Chapeau to those hearty souls who got out for the main and gravel rides last weekend in that weather (yes believe it or not there were some who ventured out). This Saturday looks OK – at least for the morning so we might get a ride AND a coffee in before it turns.

So this weekend’s main ride route has been the most affected by road works over the last 18 months which was about the last time we scheduled it on. Initially there were changes to lanes and a new roundabout along Belmont Avenue, then road resurfacing along its namesake, followed by a new bridge over the Roe highway on Kalamunda road and finally more road resurfacing along Midland Road. It’s had more work done on it than a Hollywood actor/actress!! Whilst there’s a few witches hats dotted along its length, we think it’s time to put Abernethy Rd back in circulation. If you haven’t ridden it before, please do yourself a favour a take a look at the ride route following the link below.