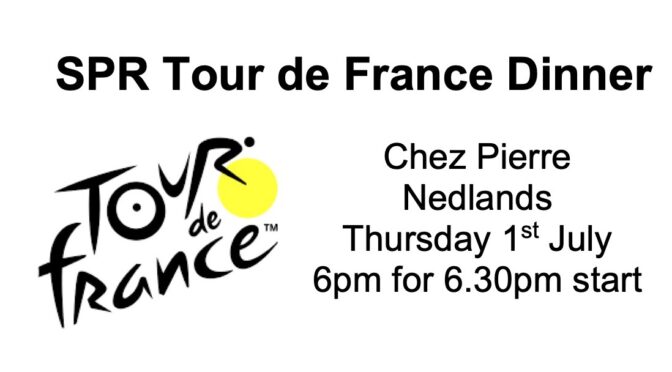 The SPR Committee is pleased to announce that we are this year again holding our Tour de France dinner. This year at Chez Pierre.

The dinner will be held on Thursday 1 July with a set menu at $75 per head. See the SPR shop for the menu and all the details.

We do encourage dressing to a French theme, and we hear a rumour that an SPR-flavoured quiz will make an appearance on the night.

Tickets available now in the SPR SHOP here. Numbers are severely limited (sorry), so get on your bike and book a ticket! 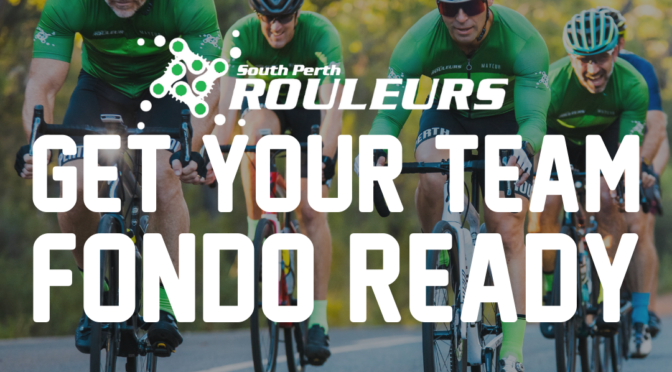 The Swan Valley Fondo is back as part of the WestCycle WA series: Sunday 13 June 2021

Gather a few like-minded cyclists and create a team or just jump in yourself.

Two distances to select from:

B: 51km 3 scenic laps (reasonably flat) $78 pp*. If you are new to group cycling events and want a collegial non-competitive participation ride this is for you. Check out the route on Strava.

Don’t wait – register by 9 June midnight via this link.

You can create a team or join a team by selecting an Individual Registration then selecting I’m part of a team.

If you have any questions, please contact me on the Community Development email address (comdev@southperthrouleurs.com.au). 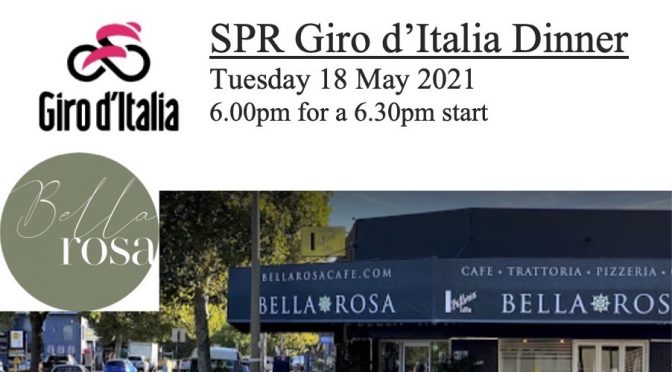 The SPR Committee is pleased to announce that we are this year again holding our Giro D’Italia dinner. This year at Cafe Bella Rosa.

The dinner will be held on Tuesday 18 May with a set menu at $45 per head. See the SPR shop for the menu and all the details.

Tickets available now in the SPR SHOP here. Numbers are limited, so veloce!

We have 11 people so far who are doing the  Lighthouse to Lighthouse (road bike) Sunday 12 Oct 2014. Most likely this will divide into a faster and “less fast” group – Shaw wants to make it in 4 hours..I just want to make it…

Below is an overview of this event:

Accommodation is filling up fast as the event is at the end of the school holidays. Registration for the ride is now open $75 pp – if you need to book the return bus back to the start, you can do this when you register. Just select the option from “merchandise” at the end of your registration.  This is not officially sponsored by SPR and each person would be responsible for making their own arrangements.

With an impressive total of 72 riders comprising a grand total 9 Teams, the South Perth Rouleurs well & truly dominated the 2014 Swan Valley Cyclo again this year.  SPR also took the lead in creative & original team names… they were there in abundance but left a massive chain ring of unanswered questions… like if the Princesses really were?  Could the Chasers chase?  Were the Good Old Boys actually any good… or just old?   And would the speed prove fatal for our Femme Fatales?  Would the SPRring Chickens cross the white line?  And most importantly, did the Didyabringabee do as they promised?!

But with the Club providing pastry’s at the start (thanks Laurensia for the extra carb boost!) and drinks available at the end to reload, through the chattering of teeth the mood was positive if not a tad chilly so jackets were back on pretty quickly after the official photo was taken.

Proving you can teach old dogs new tricks (like where you ankle is located!) this year we were able to ensure every Team registered a time…   and some very good times at that.  In fact SPR recorded the fastest time on the day & hold the proud honour of having the ONLY team on the day to break into 40+km/hr territory!  Outstanding given the headwinds that sprang up on the last 2 laps. But which team?!  According to the “official” results it was SPR Femme Fatale’s though there seems to be some ongoing dissention from the SPR Chocolate Canards who were ducking for cover when they read BWA had only registered their ride at 35.292 km/hr.   The suggestion has been made that those 2 teams need sort it out between themselves with a rematch… or at the very least, Garmin duel at 20 paces?

Meanwhile, the Good Old Boys were congratulating themselves for contributing to the girls excellent result by being true gentlemen & overtaking the girls on the 2nd lap & allowing the Femme Fatales to draft behind them… adamant they were only trying to help them, the girls were having none of it & showing true Cyclo etiquette of “no drafting” soon over took the G.O.B. for a second time to prove they didn’t need their help. In other words. Yes. They got “chicked”.

Importantly, everyone had a safe ride and there seemed to be a little less “white line fever” on the course and the only incidents were when one team (who shall remain unnamed) decided it was necessary to stop for a wardrobe adjustment (… girls?! Well, you never know where those dreaded cameras will pop up do you?!) .& despite employing the dubious tactic of placing an (ex) Policeman on their team, Didyabringabeer  had to wait 5 minutes for a wide load to go by.

Overall, a great day was had by all and while we are told numbers were down on past Cyclo Swan Valley rides (& it would be interesting to hear from anyone who feels there is anything different we can do as a Club can do to encourage even more to participate next year?) everyone who participated did South Perth Rouleurs proud.  Well done & thank you.

NOTE
Please note that VenuesWest has introduced a $5 parking fee which will be payable in cash on arrival if you chose to park within the SpeedDome car park.

Green for registered  Its great fun, especially for a first competitive event.. its not a race!  right! cheers SPR Social Club

For tomorrows Bupa Bike Hike, I know of four SPR Riders lining up for the 80km distance – Ross, Andrew, Bill and myself . If you are interested in joining, we  intend to meet at the water tank opposite the tent where we registered around 6.10am ready for a 6.30am start – not sure if Andrew knows this yet!

The route for this years ride is longer, starts and finishes at Langley Park so will be easier to get to and from.. all for a good cause…

I have a tool pouch which dropped off a bike on Albany Hwy Sat morning transition ride (7 Dec) that suits a deep dish wheel (also contains a canister + mini pump).

We believe it may have come from the SPR main 1 group that past the transition ride soon after Nicholson and Albany intersection…… the first of several groups to pass us.. .

I ran over the tool pouch .. so it is now in need of a few repairs.

Race pack information will also be sent to participants after registrations close on Tuesday.

I don’t get around to writing up the rides these days what with three teenagers at home, but today’s calls for an update after two in the group finished their ride in a St Johns ambulance. We had our largest group for a long time when we started to roll through around Shelly the group bunched up at one point and with nowhere to go Vicky and Amanda came down.  They both hit the road hard …….with their heads….. thank goodness for helmets – in this case they have saved their owners… no complaints from me about the nanny state when you see someone’s head hit the bitumen.

Vicky and Amanda are both fine, though I’m not sure if they survived the coffee at Charley Gardiners….  All bones and teeth are intact. Amanda has abrasions and both a good amount of bruising, but I do believe they will be back on their bikes soon.

Fortunately Ross was cycling today and lives close by to the accident site so was able to retrieve the bikes whilst the ambulance took the wounded.

There were a large number of groups cycling along Shelly today and lots offered help and one cyclist (female) physiotherapist checked the girls out… for injuries….of course. You could feel the heartfelt concern from the many cyclists passing…… it is sobering to know this can happen to anyone any time. I did think one bunch was going to ride into the back of the ambulance… doors flapping wide open.

In case you think an ambulance is overkill, my experience having ended up in emergency quite a few times with a somewhat competitive third child who only knows one speed (or maybe she’s just trying to be heard above the noise!), the cost of an ambulance ($780 std trip) is fully refunded; so always happy to err on the side of caution to ensure all injuries is identified… no brainer when someone hits their head of course.

I think I’ll need to start writing up the rides regularly so it isn’t only when things go awry that you hear how we went.

Oh and yes the bikes do seem to be unharmed.